We awoke in the morning to the mosquito armies drifting in one by one. As I rolled up the sleeping bags, inhaling fresh air through the open back door of the van, I heard Laura gasp outside.

She pointed as 3 deer bounded gracefully across our island, toward the tall grass – pursued by Olive and Chaska. The two dogs were too far behind to even catch up, but Laura called to them anyway.

Suddenly, her cries were pierced with, “Hey! HEY!”

A large woman was approaching the nearby dumpster, shouting at Laura’s dogs. She continued to shout until the deer had disappeared and the dogs, excited and flustered, returned to Laura.

“THIS IS WHY YOU KEEP THEM ON A LEASH!” she shouted.

I sighed blissfully. What a refreshing way to start the morning! 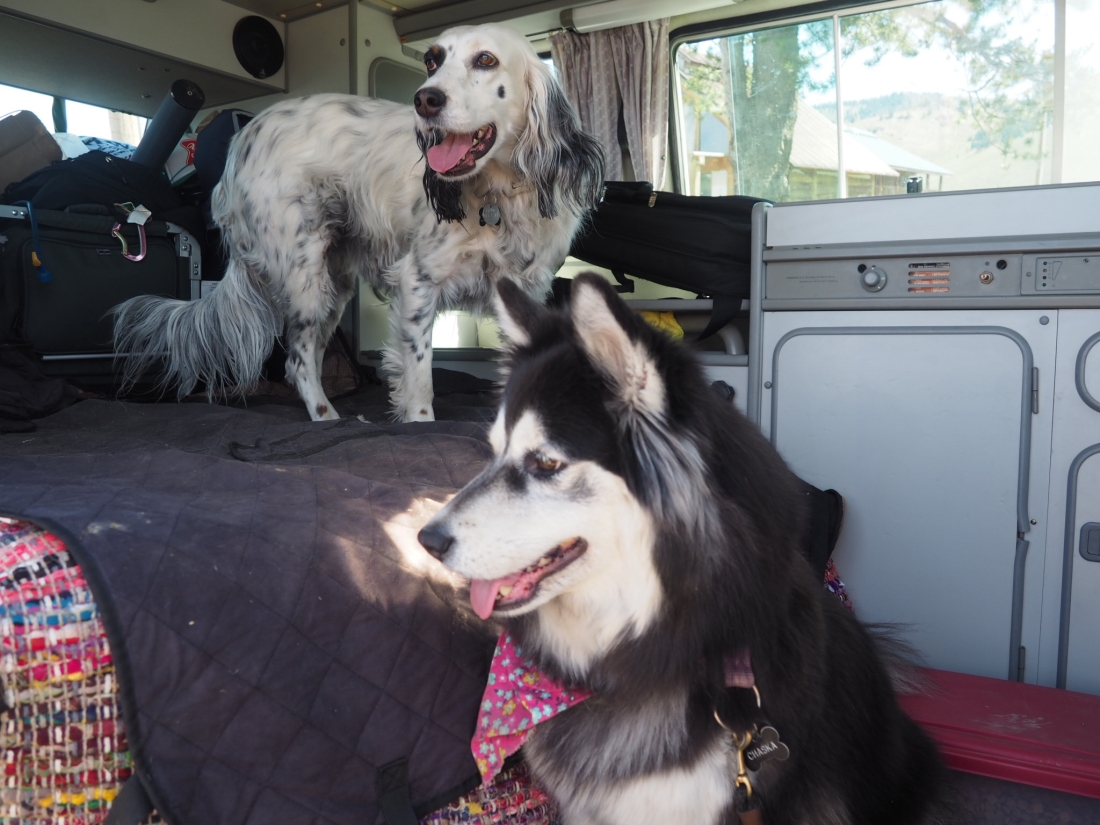 How do you yell at these pups?

The day’s plan was to drive toward Moab, then drive through Arches and Canyonlands before finding some place to camp in Utah that wasn’t too hot.

About 30 minutes into our drive, we passed a sign on the roadside and it was my turn to gasp.

“Palisades! We have to stop there!”

Ryan had told me a few days earlier that Palisades peaches are the best. Laura knew this as well, so we took the turn-off and found ourselves on a long dirt road peppered with peach stands and little wooden stores selling fruits and vegetables.

We stopped at one and bought a bag of shiny red cherries that lasted the entire trip. We continued driving into Palisades to where we found an old store selling peaches on a register from the early 1900s.

The woman in charge pointed to the marble slab that rested near the register.

“Back when this was used, people still paid with gold,” she said. “This marble tested if the gold was real or fake. When you dropped a gold coin on here, it made a certain sound. If it didn’t, they knew it was counterfeit.”

Color me impressed. I took my peach ice cream and listened as she directed us to a nearby winery – “The building is as yellow as this here pad I’m writing on.” – and we were on our way.

Aren’t these the reddest cherries ever? 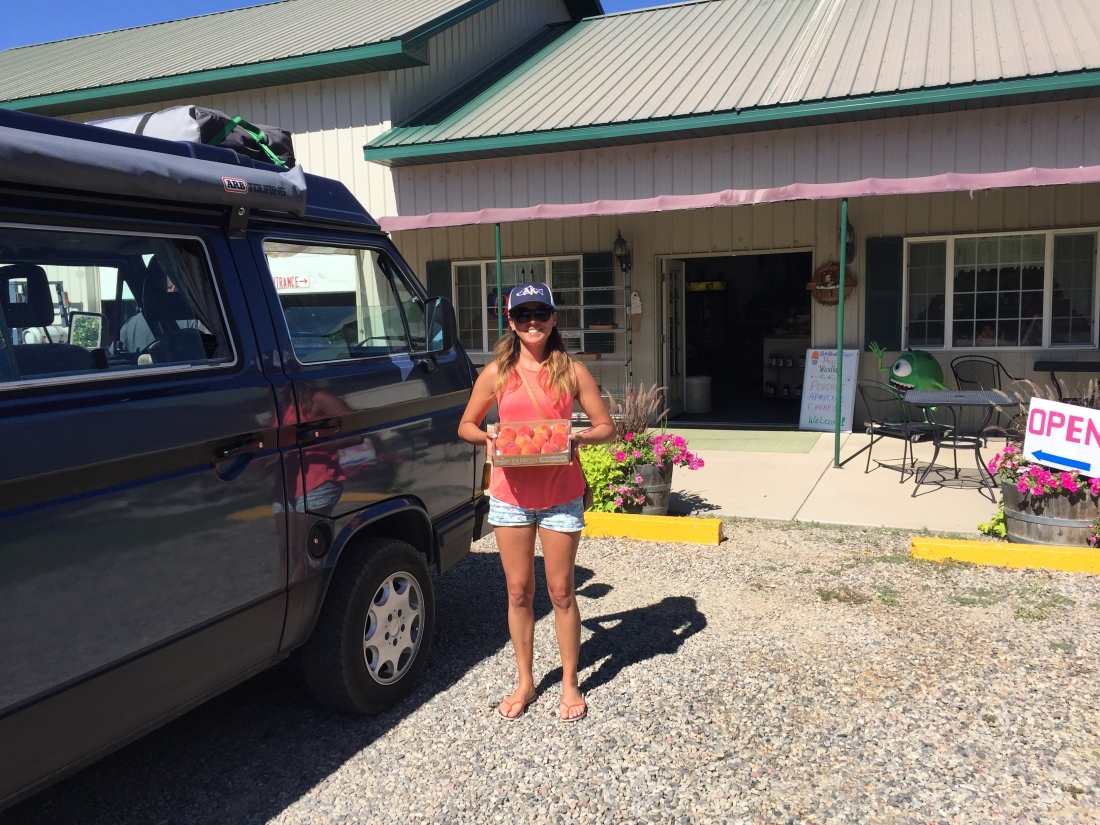 Laura shows off our peaches.

Wine tasting had not been on our list of things to do before Arches, but when we walked into the first store, it didn’t seem like we had a choice.

“You get 5 fruit wines to taste on this side, and 5 regular wines on the other,” said the woman, who was from Anchorage. “I don’t know how you’re gonna taste wine with that, though,” she went on, nodding to my ice cream. I devoured it and switched to wine.

Laura and I each sampled 5 different wines – cherry, peach, lavender, and two others, before buying 3 bottles and insisting we could not taste 5 more on the other side.

“Well at least get yourselves to the meatery,” said the woman.

“Yeah,” Laura stared at me. I pictured cured meats and pastrami being passed over a counter, until Laura said, more emphatically, “Mead.”

Meadery of the Rockies was just down the road and was staffed by two of the friendliest women I’ve ever met. Here, we got to taste 5 different meads, though I’m pretty sure we ended up trying a little more than that. Their pours were generous and their wit was sharp, and we ended up talking with them about the dogs and VW vans for quite some time.

At one point, while one woman poured triple-distilled osmosis water for the dogs (when I asked, I got regular tap water), I chatted with the other woman outside by the van. She told us about growing up in Bear Lake, Idaho, and encouraged us to head up that way. She had an old VW parked up there and was taking her time admiring ours.

We left Palisades a few hours later than anticipated, with 12 peaches, a bag of cherries, 3 bottles of wine, and dish towels from the Meadery.

For this reason, we nixed Canyonlands and headed straight for Arches. The sun beat down on the van and we both sweat profusely, windows rolled all the way down. There was no way we were camping here in Utah, nor were we spending much time wandering around Arches.

We drove into the park and chugged uphill slowly, the red dust and rocks of Utah’s desert rolling out on all sides. The arches themselves were beautiful and the striations in the rock gleaming like rusty rivers in the sun.

It was beautiful. It was hot. We took the photos we needed and exited, but even then we’d spent over an hour in Arches. The dogs were hot. We were dehydrated. In fact, we realized, entering the nearby town, we hadn’t eaten since breakfast — with the exception of some cherries.

It’s like they knew why we were in Utah!

Can you see the heat in this photo? I can.

Laura reflects on life in one of the bigger arches.

The sandwich and air conditioner combo revived us, and we hit the road to Price Canyon feeling more inspired. Again, we weren’t in a national forest, so we had to pay for our campsite, but it was a good one.

We were backed almost all the way into the woods, and the nearby campsites were mostly unoccupied, save for a friendly gentleman who was on his way back to Salida, CO. He had no problem with the dogs running free, so we set up our site and rejoiced in the minimal presence of mosquitos.

Laura and I ventured into the woods and used an axe to cut down branches from bushes. Using a Leatherman, we carved the ends of the sticks into points to roast hot dogs. What a contrast to last night’s campsite! Here we were, drinking Citradella and roasting hot dogs on a crackling campfire, wearing long trousers and sweatshirts in the chilly Utah mountain air.

It was a fitting end to a long day of wine tasting and sweaty drives through Utah.

Look at that awning. 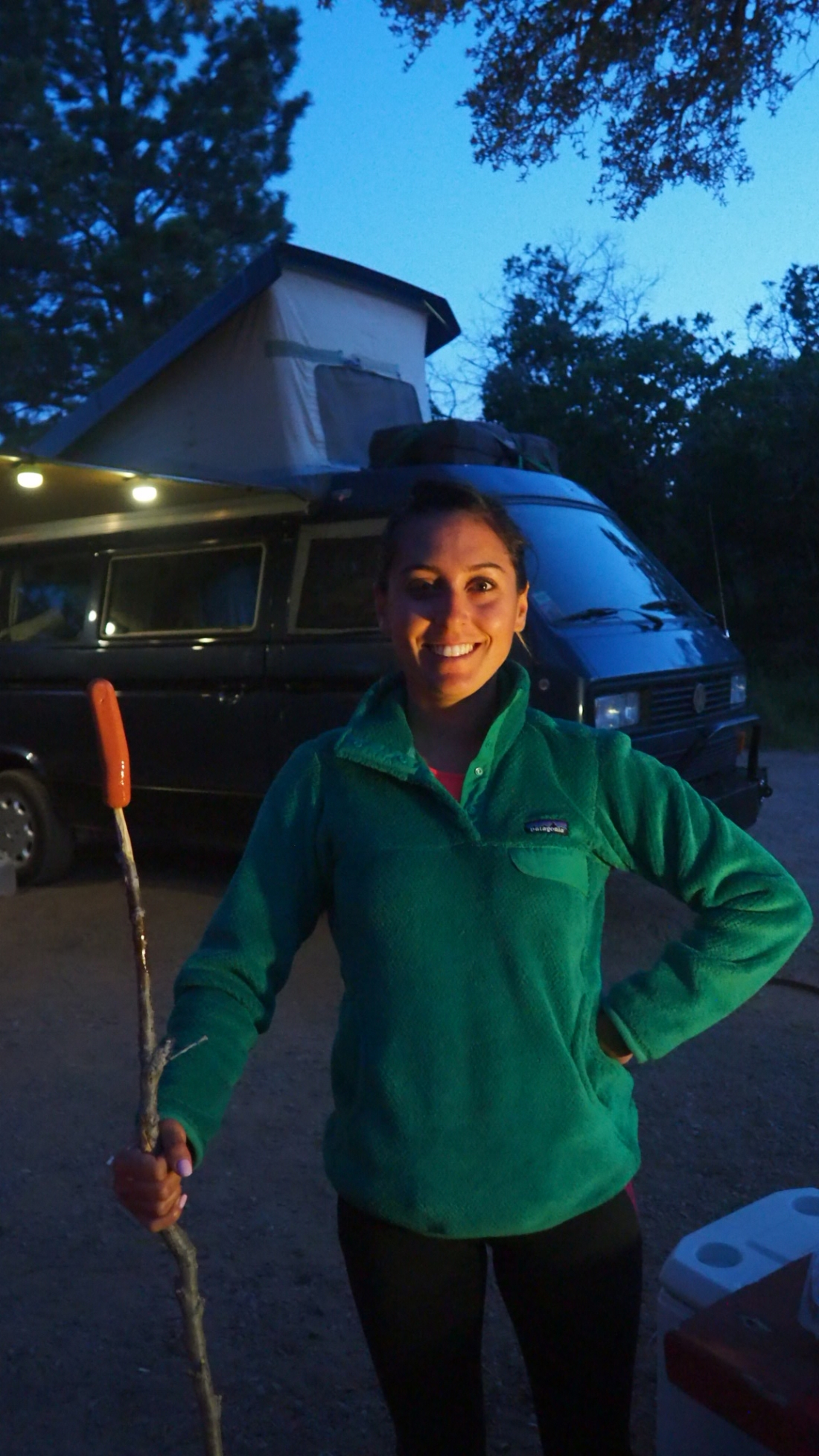 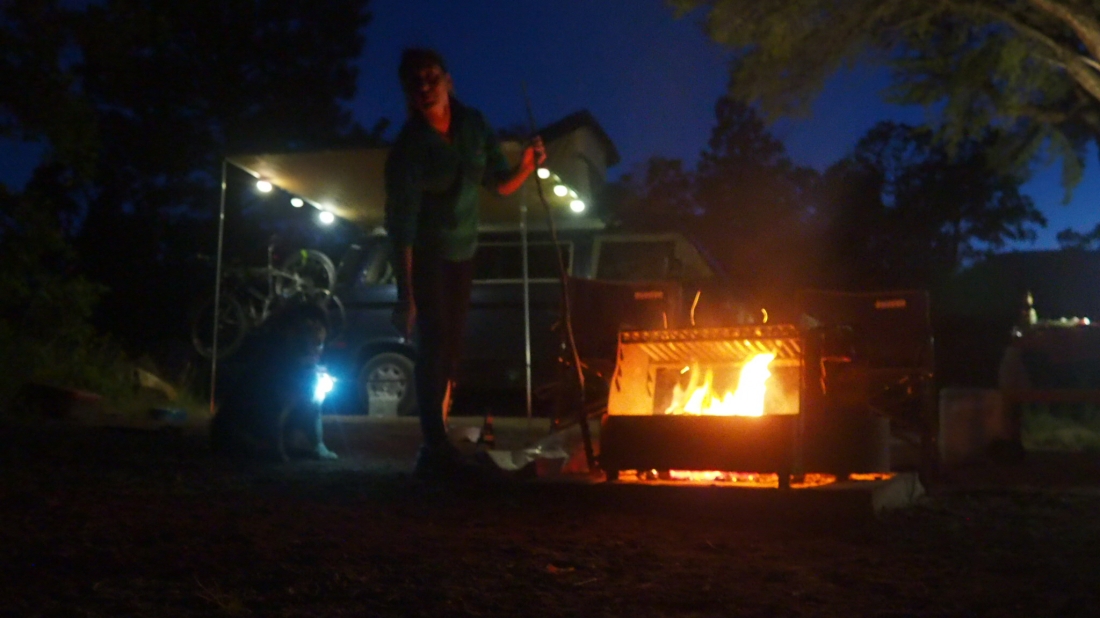