Our last day in Seoul was a relaxing one. We got off to a slow start, Googling a breakfast venue in Itaewon called Root. Our cab driver, a very patient and kind man, navigated the confusing streets for well over 20 minutes before dropping us at a road that Alexa’s map said looked promising. The driver had shut off the meter halfway through the journey, so I expected some arguing, but he instead tried to refuse the full payment, apparently feeling guilty for getting lost. Crazy. (We obviously did not accept his money.)

Based on everything else we’d experienced on the trip, we’d steeled ourselves for the fact that Root might not be open — but it was! The restaurant specialized in avocado dishes, and it didn’t disappoint. We had another nice, long conversation at a table by an open window, where a cool breeze drifted in.

Itaewon is definitely an area worth exploring more, but we had other things to do. We’d chosen Itaewon because Alexa had researched a vet that was apparently located there.

She and David are off to Switzerland next year, and the most difficult part of the move has been their cat, Burg. Burg will be staying in a Swiss cattery for some time, but requires a feline leukemia vaccine before he can be admitted. (How come there’s a vaccine for cat leukemia, and not for human leukemia?)

The vaccine is not available in the Philippines…but it is available in Korea. We’d need to make a stop at the vet. Alexa had downloaded Naver and located the vet on the map, and thus began a long journey through the neighborhoods of Itaewon we may never have seen otherwise. By the time we arrived at the vet, sweaty and sufficiently worked out from strolling up and down hills, we were grateful for any blast of air conditioning we could get.

Of course, it was the wrong vet. They had no idea what we were talking about, so Alexa expertly did some Googling and found another vet just down the road that happened to be the one with the vaccine.

“How is it that there are two vets on the same road, and they don’t know about each other?” she wondered.

This was a great question, and one we knew we would not find an answer to. We left with the vaccine on ice and took a cab back to our hotel.

As avid coffee lovers, Alexa and I decided to check out one of the many coffee establishments around the neighborhood. There was one downstairs in our hotel, strangely named “Angel-In-Us”, that sold $5 coffees. For a chain, it was delicious. And while restaurants close at 10pm in Korea, cafes are open all night, it seems. Korean study culture demands it.

At 1am, you could be walking home and pass by a cafe that’s more packed than a bar, with people hunched over computers, sipping coffee. Amazing.

Alexa had researched a place down the road called Caffe Themselves, an industrial-looking interior with a second floor. 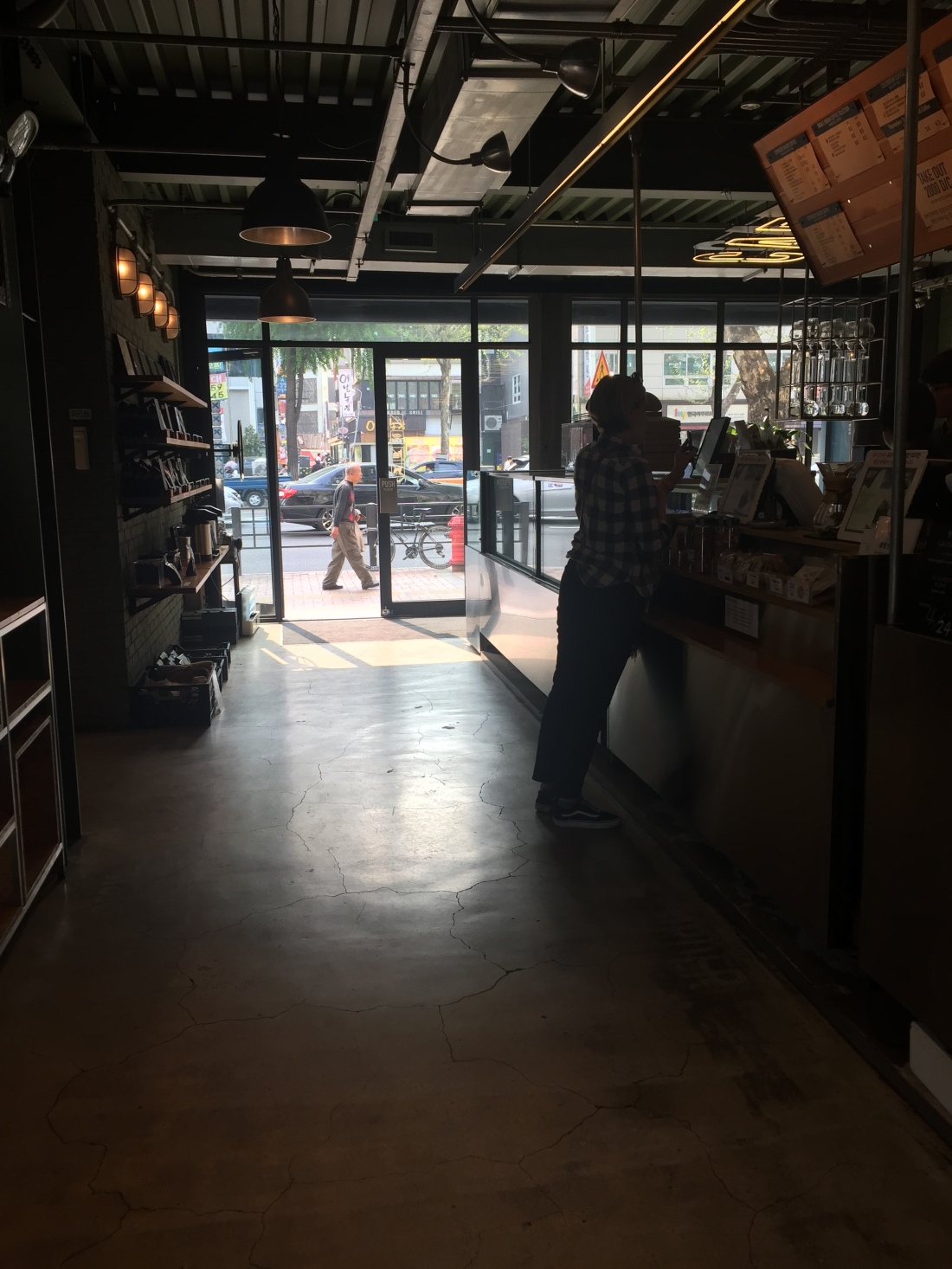 “Apparently the baristas are amazing and know their coffee,” she said.

We brought our books (Alexa: the Pulitzer-winning Less, me: Crazy Rich Asians, which I’d borrowed from Alexa) and settled down on the second floor with our coffees. I know, part of travel is seeing everything you can possibly see about a place, but sometimes it’s nice to enjoy some down time and a good read.

And the only time that Alexa and I see each other in Manila is in the hallway between classes, where conversation is school-related. Sure, we’ve had our share of pedicures and yoga classes, but it’s totally different to travel with someone and spend every hour together. You’d think you might get tired of each other, but our conversations only seemed to get better and better.

For dinner, we considered going to Gangnam, but we were also both keen to try some good bibimbap. We’d had some on the plane, and it didn’t seem fair for that to be our sole bibimbap experience in Seoul. (Ha, ha.)

Alexa found a rave restaurant through some Google searches, called Bear Who Eats Greens (or, according to the Internet, Veggie Eating Bear). Located in Hongdae, it seemed like we were recreating our first night’s misadventure.

This time, we showered and left earlier, using our new map app to locate the correct street. And, somehow, we found it. The ambiance was immediately striking. The front resembled an old mansion, with a trickling fountain and sprawling garden outside. We sat at one of the small tables in the courtyard and ordered.

“You need to sit inside,” our waitress said. “Not enough space here.”

We relocated to a larger table, and immediately saw how necessary it was. We’d ordered Korean pancakes and two individual bibimbap meals, and it was a lot. I’d told a friend that we were seeking bibimbap, and he’d replied with, “That’s like going to America and eating scrambled eggs.”

I’m here to tell you that it is not. It was the perfect final meal for our time in Korea. 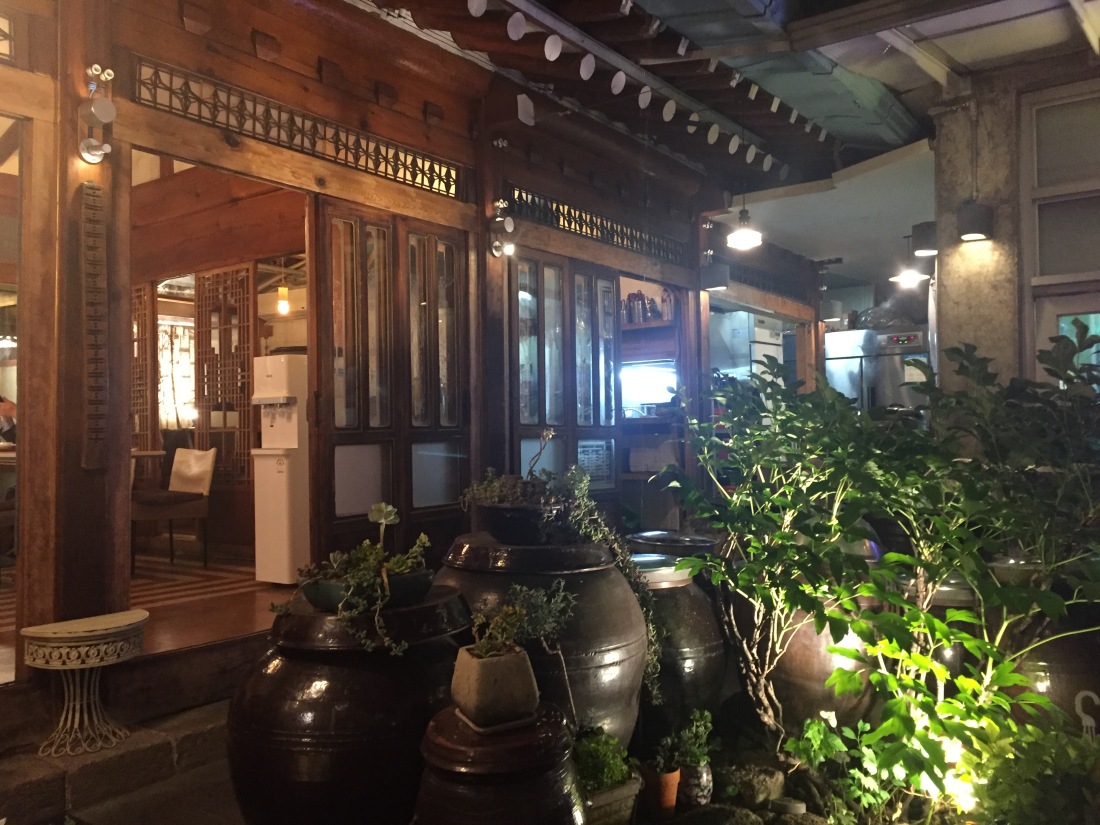 The restaurant was closing as we paid our bill, and an elderly woman emerged from the kitchen, smiling. She asked if the food was good.

We both eagerly replied that it was amazing. While I was in the bathroom, she apparently rubbed Alexa’s belly and laughed. As we left the restaurant, she waved to us from the stairs.

How much more perfect could an evening be?

And to top it all off, we hailed a cab in a matter of minutes.

While I’m not sure I could live in Seoul, I could definitely go back. I’m always hungry, and it’s pretty clear that the food there is especially good. Plus, it’s only a 4-hour flight.

Until next time, Seoul.