Arriving back in Denver the day after our fly fishing trip, I found myself in the backseat of a car with an enthusiastic Uber driver.

“Did you catch anything?” he asked me, nodding toward my rod.

“We did, actually,” I told him. “First time ever. Normally I don’t catch anything.”

“Well, it’s not called catching. It’s called fishing.” He paused. “Did you cook the fish?”

“Oh, right,” he said. Then he turned around to look at me. “But would you kill a fish?”

“I’d rather not…I don’t think I could kill a living thing.”

“Okay, well what about the hatchery fish. You know, the ones they raise to be caught, and dump into the rivers. Would you kill one of those?”

“…those are also alive.” I decided to change the subject. “So, can rattlesnakes bite through waders?”

I am glad I did not know this a day earlier, as I was marching through tall grass while our guide scanned it for rattlesnakes.

Normally, Laura and I take a week out of the summer and drive around the west in Loretta, Laura’s Westy, but times have changed.

What I mean to say is, people are having babies. Breastfeeding babies and meandering vans do not go well together.

Instead, I decided to take a rather spontaneous trip to Colorado for four days so I could go fishing with Laura and Holly, who has also had a baby. Holly invited her friend Emily, who – you guessed it! – also just had a baby. The idea of three women pumping breast milk, their fly rods propped up on the van behind them, was a badass one, because fishing is still so typically regarded as a man’s sport.

Holly organized the trip using LiarFlies, a guiding group she’d worked with before. Though Holly, Laura, and Emily are all experienced fly fishers, we weren’t sure where exactly we’d want to go on the Poudre, and felt we’d be in safer hands with guides.

This was an excellent decision. Our guides J and Evan were witty, knowledgable, and patient, and when you brought a fish to hand, they were sometimes more excited about it than you were.

We gathered in the parking lot of Rocky Mountain Adventures to hear J’s safety briefing, which I know is standard, but it never fails to freak me out.

“There’s bears where we’re going, and moose, and rattlesnakes,” he told us after explaining what to do if we were swept downriver in a wild current. All of these fears were real, especially since Colorado had been hit with a crazy hail storm the day before and lots of rain had caused the Poudre to rise an entire foot. Luckily, the water levels had subsided by the time we got there, but they were still dangerous. Knowing me, I’d be the one to lose footing on a rock and float away down river.

On the drive up, we passed a large boulder in the river that had markings to indicate how high the water was, and J pointed out that it was just below 4. Anything above was going to be a lot more dangerous and a lot harder to fish.

J and Evan packed the trucks with all of the fly fishing necessities: rods, reels, nets, waders, a cooler for lunch, and three battery-powered breast pumps. To their credit, they seemed completely undeterred by this.

We arrived in a small lot along a gorgeous stretch of the Poudre, where the river bends in the canyon. As they laid out our waders in the parking lot, I wondered if I would catch anything. I hadn’t before, and the idea was kind of unnerving. I wouldn’t be killing the fish, but hooking them felt a little mean.

“You call it fishing, I call it hunting underwater,” Shar told me a few weeks ago. Another friend added, “It’s kinda like bullying the same kid at school for their lunch money day after day.”

“I’m teaching it to avoid flies,” was my response.

With my inexperience, I figured I wouldn’t have to worry about that anyway, and decided my goals for the trip were to learn a few more things about the sport and enjoy nature. (Seriously. Picture Manila, and then imagine the complete antithesis. That’s where I was.)

Badass Laura in her waders.

I pulled on the waders, neoprene booties, and waterproof boots. What a game changer. Wading into the river, I could feel the cold of the water, but was miraculously dry. I didn’t really believe it until I pulled them off later and checked my leggings to ensure they weren’t wet.

J took Laura and I up near the bend in the river and taught us what to look for.

“Foam is home,” he said, and I filed that away with Woodie Walker’s advice to always look for fish in the quieter parts of the river where they wouldn’t have to struggle against the rapids.

We waded in just off the bank, which was enough to feel the current of the Poudre. With branches and trees directly behind, we worked on roll casting, high stick, and following the fly.

By the end of the day, we’d all caught something. With the help of J and Evan showing me how to set the hook and turn my body toward the bank, down river, I managed to bring 4-6 fish to hand.

This is testament to the expertise of our guides. Holly, Laura, and Emily are all experienced fly fisherfolk, and had no problem catching fish on their own. I learned a lot on this trip. One thing I learned was how to catch a fish. So, thanks, Liar Flies.

My crowning achievement was a 15″ brown trout, which I got to celebrate with Evan, whose excitement made it even more of a victory. (Later, on the airplane, I noted that my United Economy seat was a mere 2 inches longer than my fish.)

What was possibly even more satisfying, though less impressive size-wise (but size isn’t everything, right?), was a small rainbow I caught on my own. Evan was showing me how to fish with a dry dropper rig. I’d had a fish on the line and it had swum off with my nymph, and Evan was going to work with Emily so I figured I’d work on my roll cast. I didn’t expect to get a bite on the dry fly, so when the fly suddenly dipped below the surface and I set the hook and turned and saw the fish at the end, it was thrilling.

I hollered and Evan came with the net. Another perk of having guides. 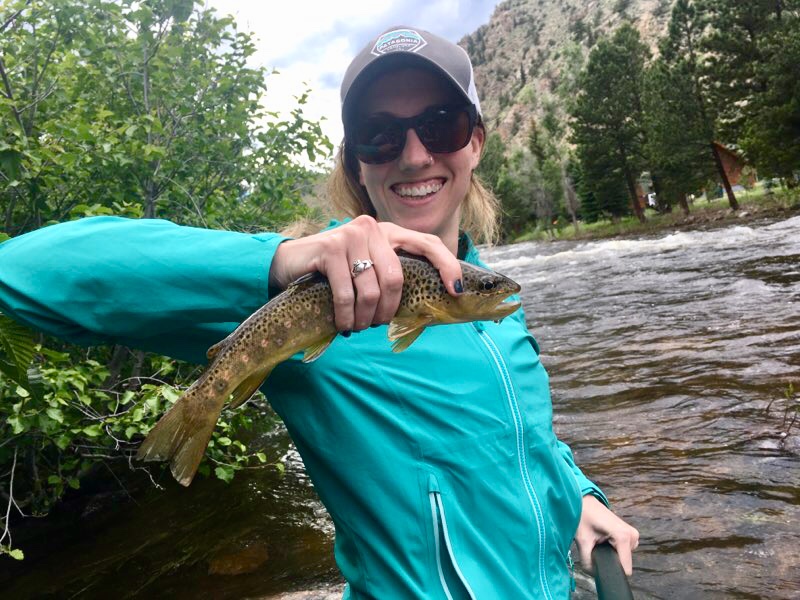 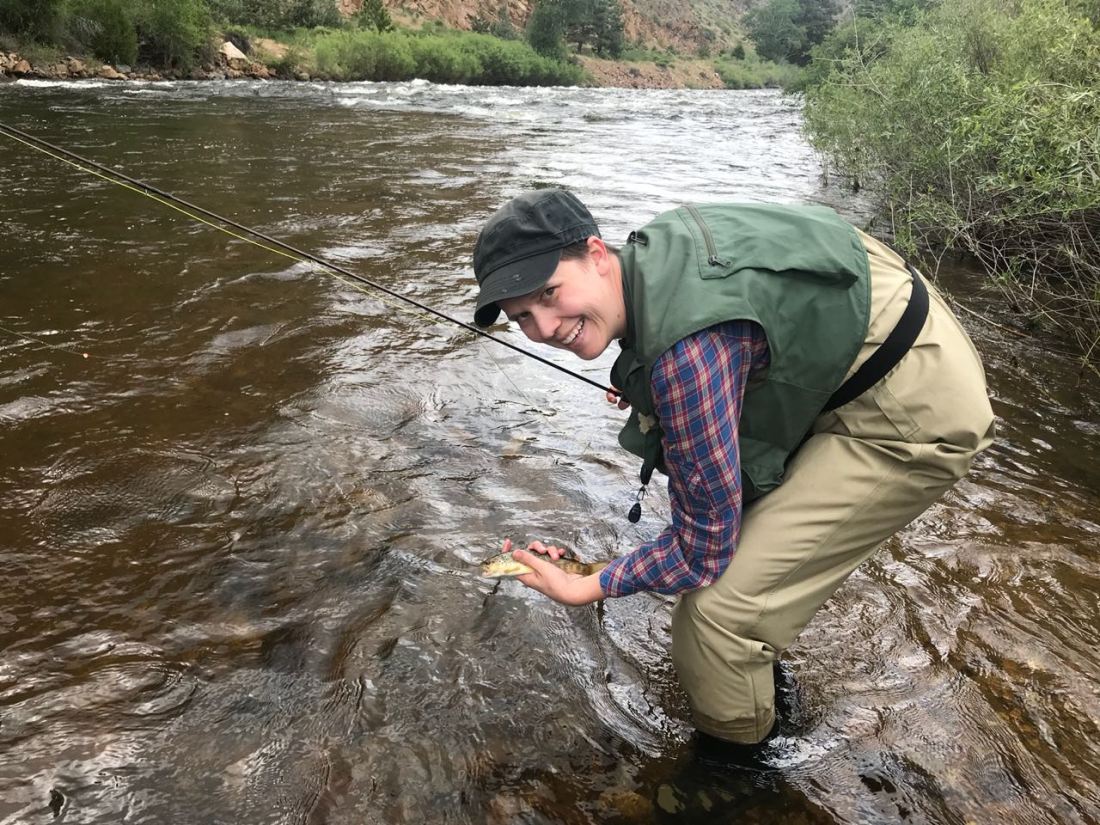 Laura with her fish

At lunch, J set up a collapsible table with a sandwich spread and the four of us sat down while Evan eyed our waders.

“Is anyone leaking?” he asked.

“That means something a little different right now,” Emily replied.

After lunch, as we all trooped back down to the river across a field of high grass, nets and rods in hand, faithful that our waders would protect us from ticks and, I thought at the time, rattlesnakes, a cloud system moved in and the sky turned a beautifully mottled shade of slate. Shadows passed over the pine trees on the ridge, the river wrestled with itself over rocks, and from somewhere came a flurry of cottonwood that filled the air like snow. (Picture the Upside Down from Stranger Things, but fewer demagorgons.) It was an eerie peace, the calm before a storm that never came.

At the end of the day, we packed up and drove back into Fort Collins, our cell reception returning as we emerged from the canyon. Being off the grid had been a relief, and I was reluctant to return to it.

I was less reluctant about joining Holly and Emily at New Belgium for a celebratory beer, which tasted like success and not drowning.

It was agreed as we all parted ways that we would make this trip an annual one, and maybe extend it to camping next year. Saying good-bye to Laura, we had a good old hug at the fact that we have managed to see each other every summer since we left Cairo. Here’s to next year. 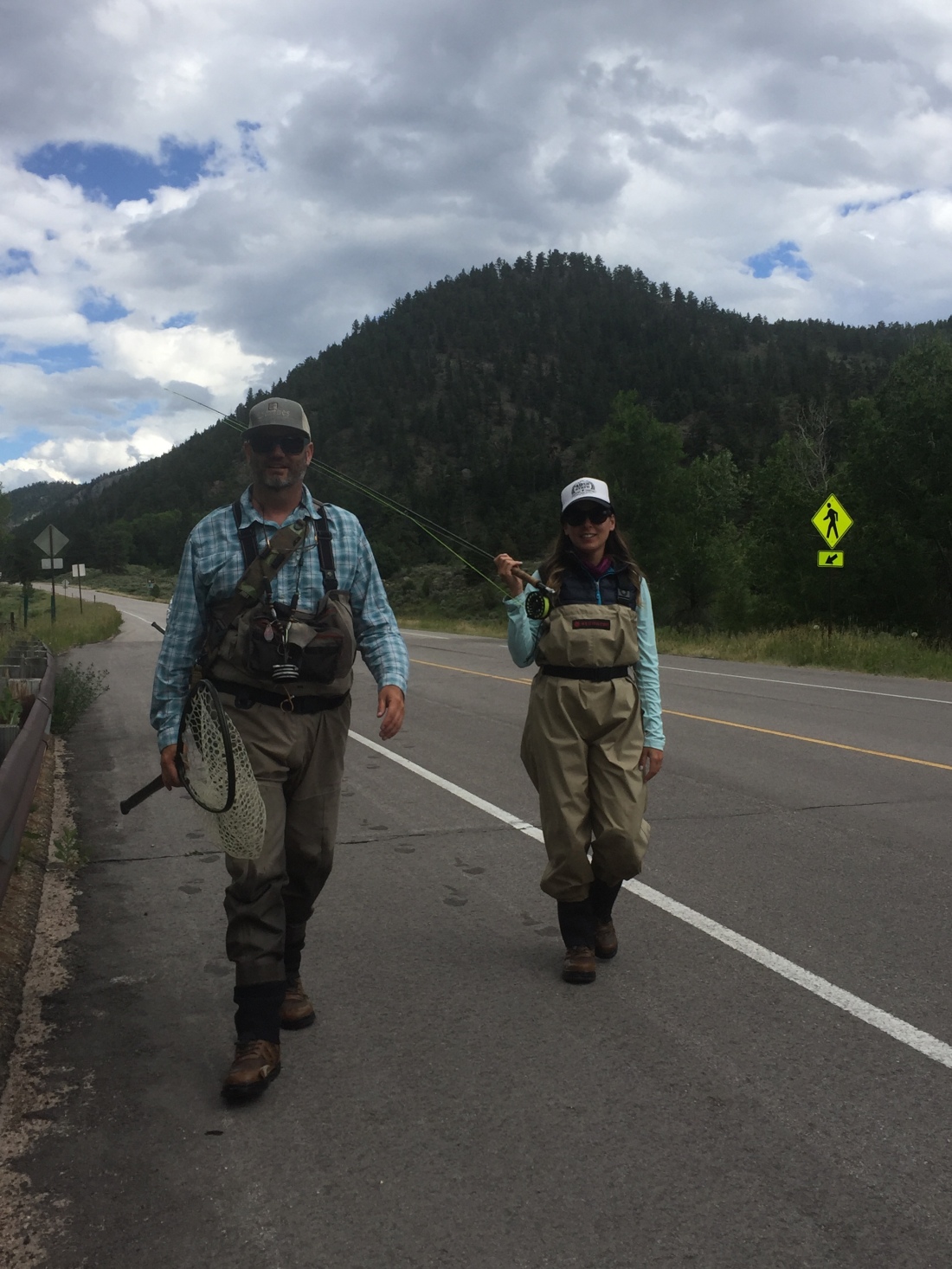 Have rod, will travel

Not for lunch: fish 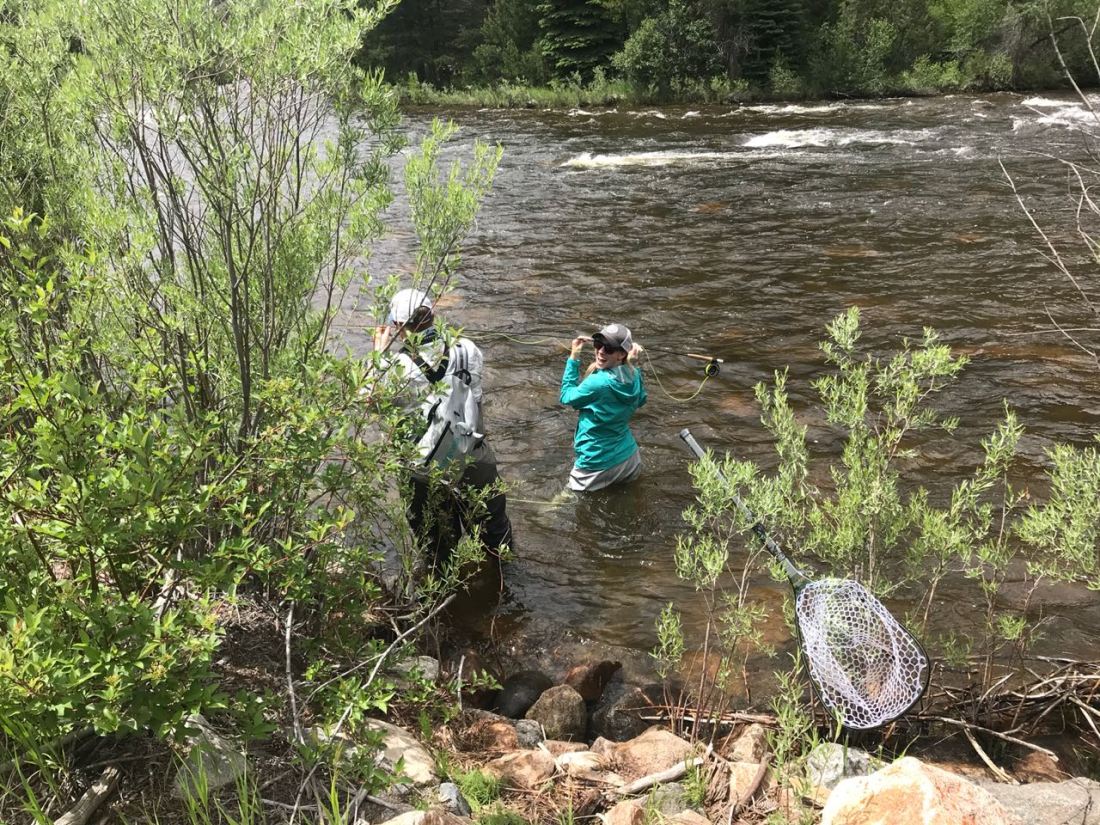 Chillin on the bridge