On my first day in Columbia Falls, I woke up at 7am to get on the road by 7:30 for my rock climbing trip. The kind folks at Moss Mountain Inn had prepared me a tasty boxed breakfast to go since I’d be missing their sit-down meal. It was packed with hardboiled eggs, yogurt, fruit, and other yummy joy.

The directions were clear: take 93 North through Whitefish, then look for mile marker 158, cross Stillwater River, and turn right down an unmarked dirt road. .9 miles, park on the right. Rock Climb Montana was clearly prepared.

My guide, Tim, was already there setting routes. I asked him if I should be worried about the grizzly warning sign I passed on my way in, and he assured me we wouldn’t see any bears.

The climbing routes ranged from 5.4-5.10d, with a variety of challenges – face climbs, overhangs, stemming, crack, arete, and other dynamic routes.

It was my first time climbing outside in the US, and it did not disappoint. The location was right beside a lively creek, with lots of trees and shade and beautiful rock. I struggled a bit on the 5.10d, but Tim, encouraging guy, said, “You did climb it – you just didn’t get to the top.”

I did most of this! It is a face climb. It does not have juggy holds.

Hello, rock! I climb up you now.

In between climbs, he taught me how to tie a bowline knot to anchor myself when belaying someone heavier than me, went over how to set up rope in a grigri, and then I belayed him. The whole day was a great combo of me climbing and me learning. Our session ran from 9-12, but he didn’t have another client that day, so he offered to teach me how to clean the anchors.

A highlight here was tossing my leash into the grass and doing a double take upon seeing a garter snake frozen beside the pile of ropes. Tim assured me that nothing is poisonous in Montana, so I shimmied on down the ledge to retrieve the anchors from our last climb.

By 1pm, I was feeling the rush of a solid four hours outdoors. Tim was filling me in on all the must-do things in the area, including cool hikes in Glacier and neat restaurants. And then, as an almost afterthought –

“If you like breweries, there’s a great one out here,” he told me. It was called Homestead Ales, he said, and the owner was a woodworker who had set up his shop way out in the woods ages ago and brewed beer on the side. Encouraged by his friends, he opened up a whole brewery in the woodworking shop and in his first year, he won best IPA in all of Montana.

“It’s really cool. It’s in the middle of nowhere, but they have a food truck set up outside so you can get lunch,” Tim told me. He gave me directions – 10 minutes further down 93, right onto Grave Creek Road, left into parking lot.

The road sounded ominously named, but I thought nothing of it. If there was beer at the end of the road, it was a good road.

Tim assured me they were open for lunch. It was nearly 1:30 by the time I turned onto the dirt road, and overhead, storm clouds were gathering. I loved it.

As I neared the end of the road, I saw a sign for the brewery. It really was in the middle of nowhere. And it was closed, according to the road sign.

Still, I decided to park and run up to the door to double check. Maybe they hadn’t changed the road sign yet. The second I stepped out of my car, the storm broke and rain poured down. I ran to the door, which showed a light on inside and 3 people sitting at tables, hunched over books. A woman saw me and came to the door with an apologetic smile.

“Oh man.” I tried to hide my disappointment, but clearly she took pity on me. Maybe it was the rain.

“Are you on your bike?” she asked, looking at the sky. I pointed at the bright red Chevy and shook my head, bracing myself for the beer-less drive back to C-Falls.

“Well, if you want to come in and have a beer, we could do that. We just don’t have food.”

“Of course. We’re just doing inventory, but you’re welcome to sit at the bar. I have to run into town anyway to print today’s menu.”

Her name was Siri and she kindly gestured to the empty room, where I chose a seat at the bar. An old woman was sitting there, punching numbers into a calculator.

And then the power went out.

“Don’t need power to pour beer,” said the old woman, who I later learned was the mother of the woodworking brewery owner. 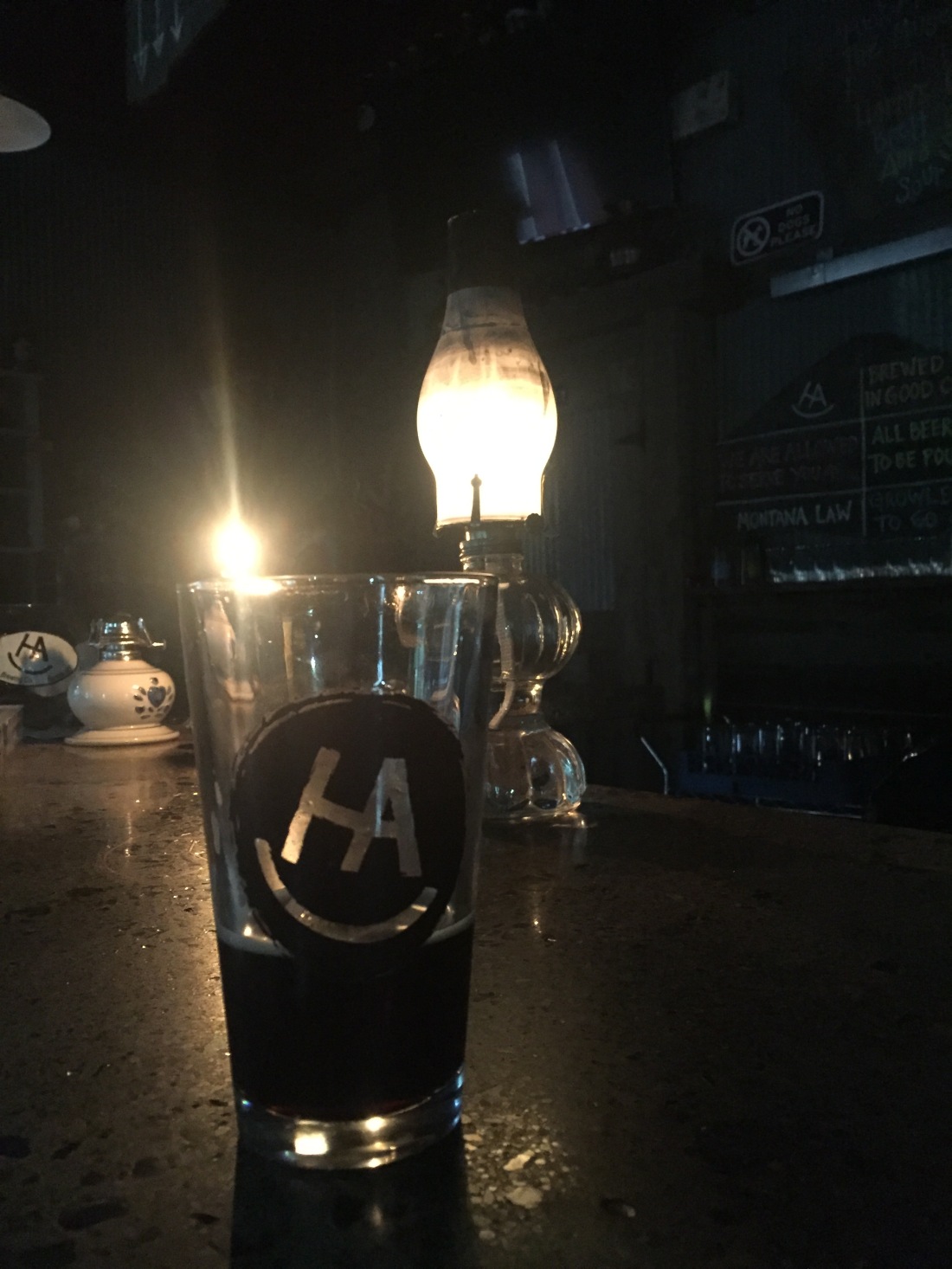 I ordered a porter – because what else warms your soul like a creamy porter on a cold, rainy afternoon? – and Siri lit a lantern and a candle. We got to chatting about climbing. She told me that Chris, the owner/brewmaster/woodworker was, believe it or not, also a climber! And so was Russ, she said, gesturing at a tall guy in goggles hosing something down.

Eventually, Chris came out and we talked climbing: how fun it was, how relaxing, how meditative and all-encompassing. Unlike yoga, where my mind sometimes wanders, climbing keeps it completely focused. It’s hard to think about anything else but the rock you’re on and your next move. We both agreed it was mindful and awesome.

“Russ and I are thinking of going Saturday,” he told me.

“We were also talking about going on Friday afternoon,” Chris said. “Why don’t you leave your information and I’ll send you a message if we end up going. You can come along.”

So I did. And I did end up joining them, but that’s a story for a later entry.

The point of this entry is to describe a perfect day. I drove home from the brewery feeling high on life, and ended up driving a portion of the Going-to-the-Sun Road, as it was supposed to pour the next day. So the day ended with stunning views of post-storm sunset in the most gorgeous national park I have ever been to, after spending the day outside and enjoying a tasty brew by lantern-light in friendly company.

Pulled off the road in Glacier and saw this. Gorgeous.

Pretty lighting on the trees.

Going to the Sun Road. 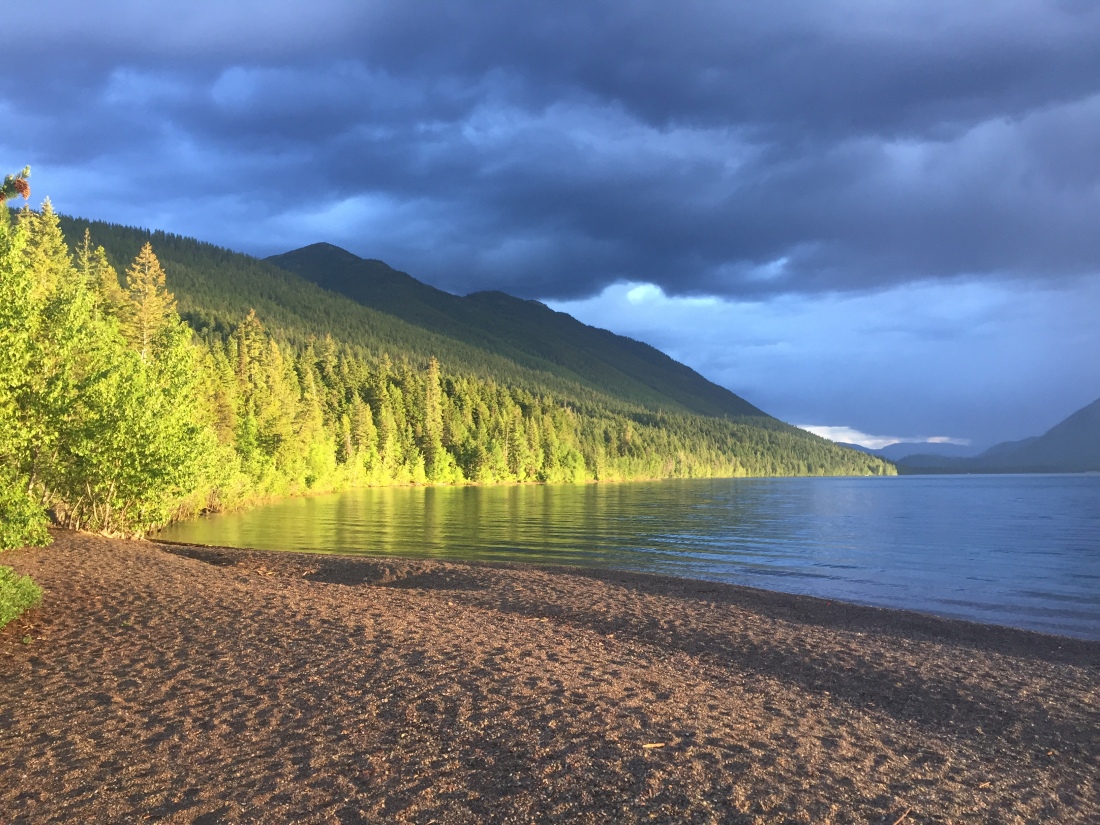 Rain across the lake at sunset.