When David mentioned that he’d booked the kids into a workshop with the Royal Shakespeare Company, I had no idea what to expect. Would we be on a stage at some creaky wooden theater that dated back to Shakespeare’s day? Would these people be black-clad and sporting berets? Would they survive 5.5 hours with our loquacious students?

I was about to find out.

We joined Gary and the coach after a full English breakfast and headed to a youth hostel nestled in a glade outside of town. (Sidenote: The kids complained about the full English breakfast buffet. “There’s nothing good here!” I was flabbergasted, because the Premier Inn has everything – even vegetarian sausages for the kids who don’t eat pork. At our next hotel, I found out what they were after – processed chocolate muffins wrapped in plastic.)

It was a cold morning, with the clouds hastening overhead as we waited in the garden for instructions. I was told later that the estate where Shakespeare was supposedly fined for poaching deer was just up the street. I mused over the apocrypha while the kids enjoyed nature. They photographed flowers, took pictures of themselves on the winding dirt path, ran up and down the gravel road. It was lovely.

A bit of color on this grey afternoon, Bancroft Gardens

Once inside, we were herded into a circle of folding chairs and introduced to the workshop leaders, a tall and expressive gentleman named Bill and his bright-eyed counterpart, Jilly. To my surprise, our 22 vociferous students shut down completely for the first few minutes, and I worried they wouldn’t get into it.

The workshop was wonderful. Bill started out by assigning each student a number and ensuring that s/he knew the number well. Then they had to shout the number, whisper the number, speak the number angrily, call it out excitedly. There were exercises in moving around the stage, acting out feelings, trying not to bump into anyone. One exercise involved Bill locking eyes with one student, who would stand up and mirror the action Bill was doing as he walked across the circle. Bill decided to act like an elderly man having difficulty walking; instead of mirroring him, our student jogged out to meet him, took his arm, and helped him complete his walk across the circle. Kudos to improv!

At lunch, I took the opportunity to grill Bill about his Shakespeare performances and learned that he’d been in a number of plays, and that the two of them run workshops at hostels on a fairly regular basis, sometimes with a vocal coach who comes along and teaches the kids to do accents. I then changed the subject to my Shakespeare book.

“Bryson writes about how new and exciting it was to see a play performed back then, because the audience didn’t know what to expect. Now, we know exactly what’s going to happen because we’re so familiar with the works.”

Bill agreed, and then told us about a memorable performance of Hamlet:

“Hamlet is interesting, because everyone knows that the ghost of the king is going to appear in the first few minutes. It’s a challenge to maintain that shock when the ghost appears, because the audience is always looking to see how they’re going to do it. The best performance I saw, I was sitting in the back row, scanning the stage, when I felt something touch my shoulder. I looked up and jumped, because there in the aisle was the actor playing the ghost, and he looked grotesque. He was painted white, and was dragging a chain behind him, but the look on his face was just…and he slowly made his way all the way down through the audience to the stage. And when his part was finished, you knew he was coming back your way and it was frightening.”

This is what I love about Shakespeare. They say his works are timeless, and they are, but there are so many new ways to perform them and keep the audience surprised. I asked Bill about Shakespeare’s mysterious lost play, Love’s Labors Won. He assured me it’s Much Ado About Nothing.

The second half of the workshop involved movement and posture. Bill was aware that we were taking the kids to see The Jew of Malta, so he pointed out different techniques that the kids could look for, such as neutral actor. The workshop concluded with the students being separated into two groups and assigned two different monologues: Puck’s speech at the end of A Midsummer Night’s Dream or the witches’ at the beginning of Macbeth.

I went with Jilly and the Midsummer crew and just sat there in awe as the students scrambled to incorporate all of the techniques they’d learned during the workshop to create a performance. Jilly and I just watched and kept track of the time. I know I don’t usually write about this stuff, but this is one of those moments you rejoice in as a teacher. I teach English because I’m so in love with books and writers and what they can offer us. When you can see that passion among your students, whether they’re involved in some heated debate over questions of race in Heart of Darkness or, like now, discussing the best way for the fairies to introduce Puck, it is exciting. And it makes you proud. 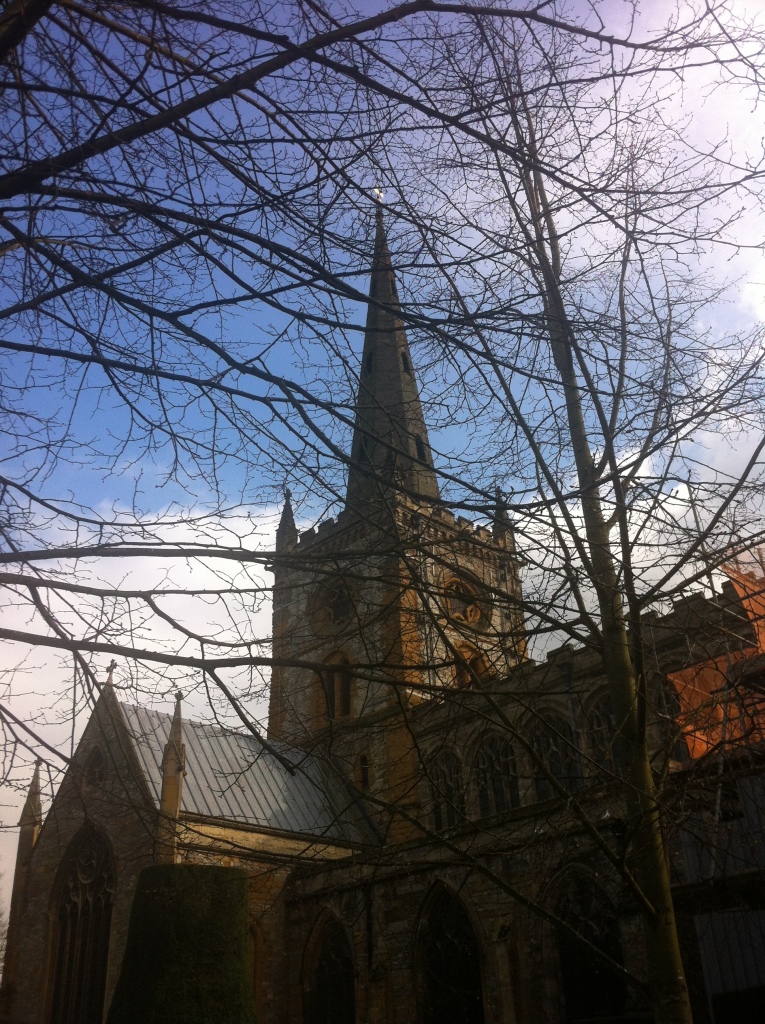 We left the workshop in high spirits and took the bus to Trinity Church to see Shakespeare’s grave and walk back along the Avon. Bryson writes that we don’t know much about how Shakespeare looked. Some scholars have taken to projecting ideas from his sonnets onto his person. For example, there are at least three instances where the speaker in the sonnets refers to himself as lame. So was Shakespeare lame? (Is the author the speaker?) David and I wondered why no one has ventured to exhume Shakespeare’s bones. Surely today’s technology could reveal something about the man everybody knows but knows nothing about. Isn’t anyone curious?? David did point out that perhaps that’s unorthodox, but still.

Shakespeare’s grave is interesting. He’s buried alongside some family members, but the order in which the bodies are arranged is strange. Shakespeare lies between Anne Hathaway and Thomas Quiney, husband to Shakespeare’s daughter Judith. Beside Quiney is Suzanna’s husband, followed by Suzanna. Where Judith and Hamnet are buried, I’m not entirely sure. At the head of Shakespeare’s grave is the famous quote warning people not to disturb his body, and above the graves, mounted on the wall, is the bust of Shakespeare that was notoriously whitewashed and then repainted, because someone is determined to prevent the world from knowing what old Will used to look like. (The bust had been painted and is supposed to have resembled him accurately, until it was whitewashed.)

Shakespeare’s grave, and its famous warning

We walked back to the hotel along the river, taking a cable ferry to cross a narrow strait of water and nearly crushing a swan as we landed. It was a beautiful afternoon, clear and sunny, offering a fresh walk back to the hotel before The Jew of Malta.

I wasn’t extremely excited about the play because I was feeling like a Shakespeare snob, though I felt some pity for Marlowe being so overshadowed by his contemporary. I know that the play is basically The Merchant of Venice, which I’ve never read, but none of that got me as thrilled as I might have been had it been Othello or something.

As usual, I was happily surprised. The theater itself, the Swan, had a wooden interior with a crisp, cool air that smelled like a barn. I loved it. We were seated in the highest level, overlooking the stage, which was especially neat because the actors and actresses passed behind us on their way to and from the set.

The play itself was a weird blend of tragicomedy, with some pretty nifty stage tricks that culminated to create a memorable ending.

Longboats on the river Avon

Outside in the cold night air, walking back to the hotel, the kids were abuzz with things they’d noticed from our workshop, the girls giggling over some of the good-looking actors. I decided then that we’d had a successful day, because if 15-year-old girls who titter over the sexiness of Fifty Shades of Grey can titter over The Jew of Malta, we’ve done something right.

Fun Fact: The statues in the Gower Memorial – Hamlet, Lady Macbeth, Falstaff, and Prince Hal, pictured above – are meant to represent Shakespeare’s ability to write about philosophy, tragedy, comedy, and history respectively.