On Easter Sunday, we packed up our things and loaded the coach. We would be leaving Stratford for London, in the bard’s own footsteps, after a morning trip to Shakespeare’s house and Anne Hathaway’s cottage, which Bryson notes is really more of an estate. (He’s right.)

Shakespeare’s house reminded me of those preserved 18th century cottages in Donegal, decorated with authentic furniture that blurred the line between historical and kind of creepy. It’s pretty cool to see a 17th century bed, much shorter than today’s to accommodate much shorter people, but glancing at the slumping midsection of the mattress, I wondered exactly how long that bed had been around and how many people had died in it. 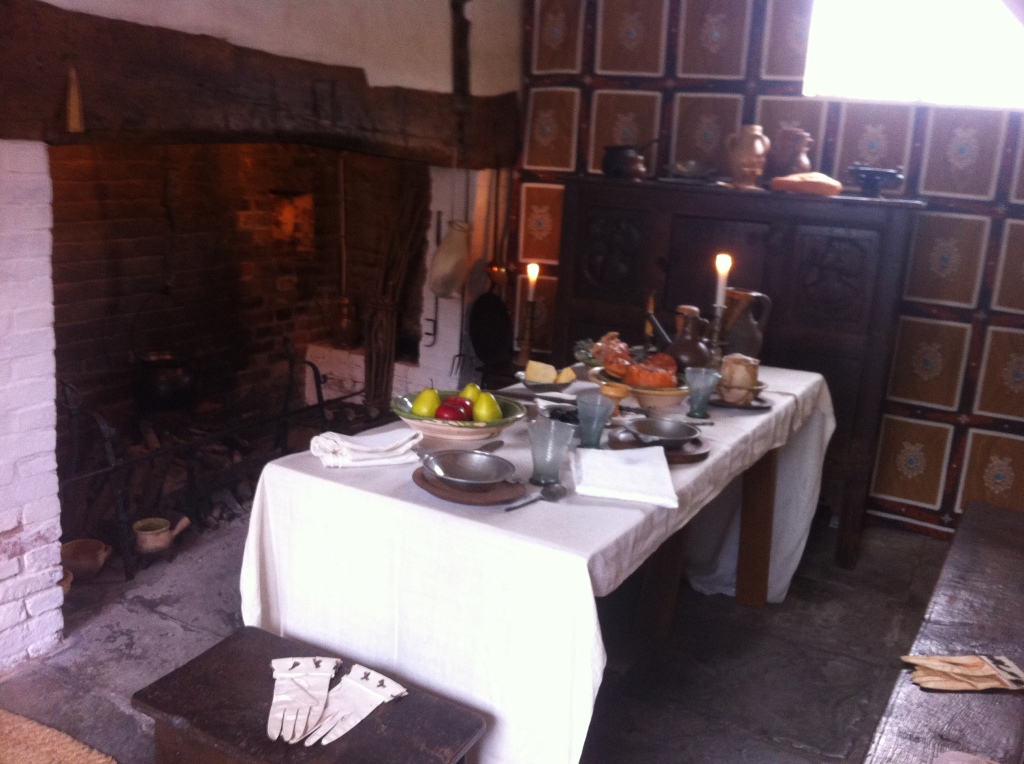 I’m not crazy about the wallpaper choice here

The house on Henley Street was pretty spacious for the 1600s, with a number of rooms to explore and numerous low doorways to duck under. One of the upstairs windows offered a view to the garden below, where two actors performed on a small concrete stage. With London on the horizon and the possibility of shopping on Oxford Street, the students had sprinted through the house and were now engaged in a performance of Pyramus and Thisbe. 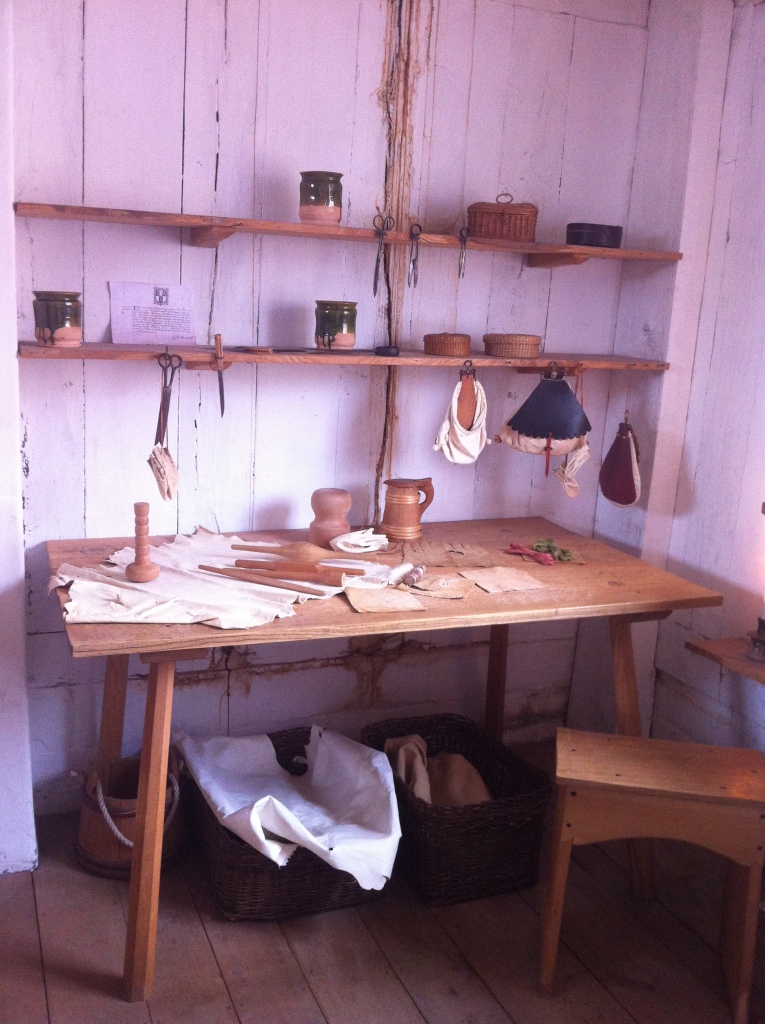 John Shakespeare was a glovemaker. Cool. 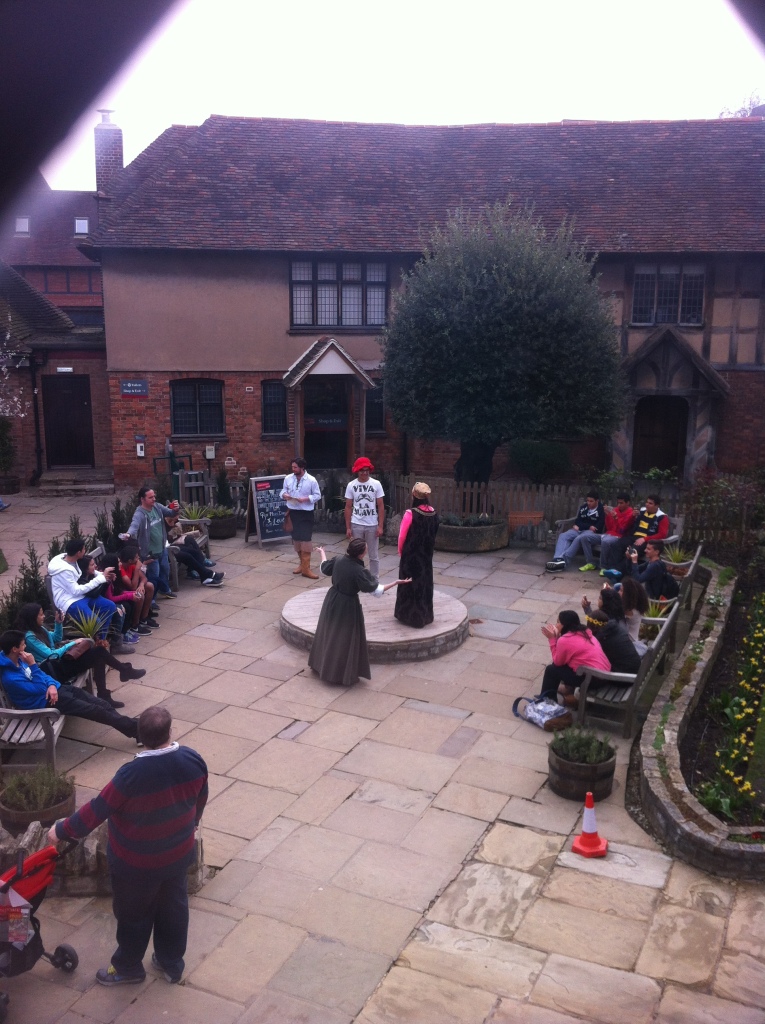 I made my way down to the garden to watch as the performance concluded, and the two actors performed a humorous scene between Helena and Demetrius from A Midsummer Night’s Dream. Standing in the cool April morning, in Shakespeare’s backyard, watching two actors in costume, I felt wonderfully elated. I wondered if they performed for groups all day long, and if they absolutely loved it. How exactly does one get this job? I chatted briefly with the actress after her performance, while the girls were photographing themselves with Demetrius.

“That’s always a fun scene to perform in the morning,” she told me, a little breathlessly. “It definitely wakes you up.”

It was with heavy heart that I departed the town of Stratford for Anne Hathaway’s cottage. What a splendid little place where Shakespeare still lives and drama is alive and thriving. (It was probably for the best that we left when we did. The Shakespeare gift shop was like Oxford Street for teachers. David and I left with armfuls of Shakespearean insult magnets, postcards, books of sonnets, and a bib I bought for Tyronne, my friends’ new baby. Another day in Stratford would have exhausted my funds for the trip.)

Anne Hathaway’s cottage (estate) was practically palatial compared to Shakespeare’s house on Henley Street. The estate included sprawling gardens, a lavender maze, wooded trails, and miles of rolling hills unfolding toward the horizon. It was romantic, though a tad sad – we’ll never know for sure if they were truly in love. He left her for London, after all, and Shakespeare in Love calls her cold. So when I read the window placards overlooking her gardens, explaining that this was where Shakespeare would have wooed her after hiking out from Stratford, I felt a little skeptical. It doesn’t seem like he would’ve wooed her at all. We spent a long time walking with the students through the rambling wooded paths, until it was time to bid farewell to the wild English countryside.

I was sad to be leaving such a wondrous place behind me, but London was calling. It wasn’t until a week or so after the trip that the students offered the best consolation: they’d liked Stratford better than London and confided that the trip would’ve been better with a day more in Shakespeare’s birthplace. Unfortunately, I think this had more to do with the hotel than with Shakespeare, which you’ll learn about soon…